Nominations of the festival

A lucky chance to perform on the professional stage with the stars was given to talented kids and teenagers with hearing impaired abilities. The final concert was attended by children fr om different cities of Russia, Belarus, Ukraine, Kazakhstan and Uzbekistan.


Video about the festival "Magic Symphony 2017"
In St. Petersburg, the Second International Festival for Children with Hearing Impairment "The Magic Symphony" was held.

According to tradition, 13 finalists entered the stage of the State Academic Capella of St. Petersburg, which the jury members selected for several months. However, to choose their professional jury this time was much more difficult than in the previous one. In 2017, the competition received even more applications than in 2016 for the first international music festival "Magic Symphony": a total of 126 fr om 8 countries and 57 cities around the world.

For several months, the jury members determined the finalists. All contestants are children and adolescents, who today hear with the help of cochlear implants. Only a few years ago, after cochlear implantation, they learned that there were sounds, began to understand and recognize speech, speak, and then discovered a musical talent. Experts on auditory rehabilitation are sure: music as nothing else helps previously unheard children to get used to the sounding world ... 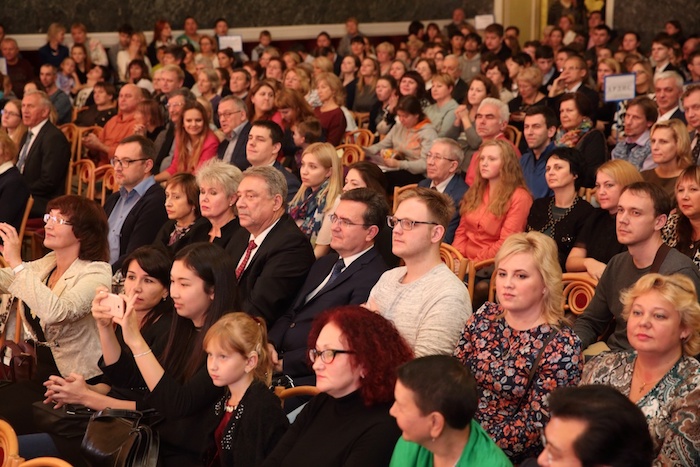 The State Academic Chapel of St. Petersburg. Guests of the festival.
In 2017, the competition received 126 applications - from 8 countries and 57 cities around the worldа.

The age of the contestants is different, but for talent it is not a hindrance. The youngest talent recently turned 4 years old. And about half of applications came from children aged 9 to 14 years. However, not only small, but also adult participants came to the finals. So 21-year-old Nikolai Kuznetsov, a very deaf-blind fellow, a student of the law faculty of St. Petersburg State University, himself writes prose and poems, which he read from the scene on October 10. 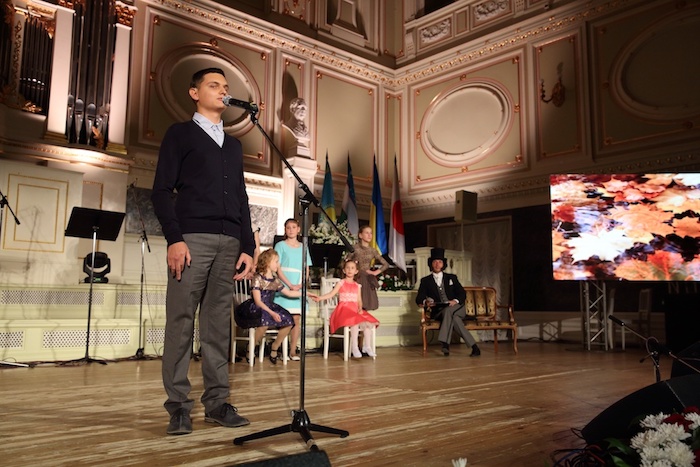 In 2017, a new nomination - "Poem" was added to the program of the musical festival "Magic Symphony", and 39 applications were submitted for the poetic nomination. Children of all ages sent touching verses in their performance. Age did not affect the skill. In the oratory art, 6-year-old Vasilisa Pepelyaeva from Perm was not inferior to the 12-year-old Petersburger Tatyana Lobach, who this year was invited as a co-host. In the opinion of spectators and professional leading, Honored Artist of Russia, Irina Smolina, Tatyana perfectly coped with the role entrusted to her.

Undoubtedly popular were the other nominations of the festival: dance, vocals, playing a musical instrument. However, the most beloved, as in the previous year, was the nomination "Dance" - applications were submitted by 53 children. Numbers of different directions were offered: waltz, Latin American, Russian folk, national dances and even themed productions. In a rather difficult nomination "Playing a musical instrument" 34 performers decided to test themselves. Young musicians played piano, guitar, dombra, cymbals and national stringed instruments. 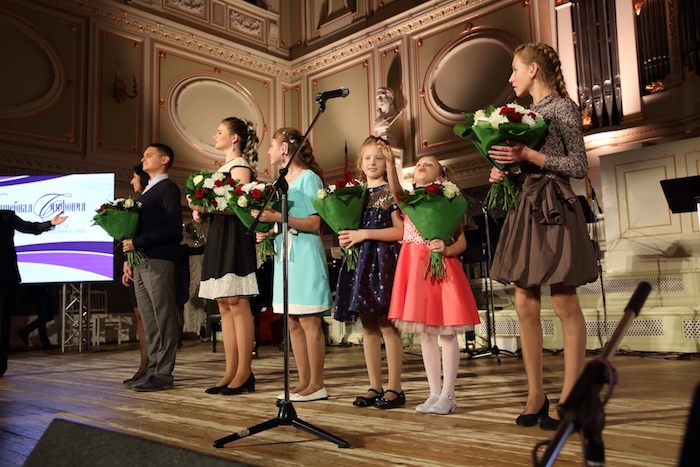 Nomination "Reading poems"
In 2017 a new nomination was added to the program of the festival - "Poem", and 39 applications were submitted for the poetic nomination.

Members of the jury noted: every fourth participant this year tried themselves in several genres. Some sent videos of all three nominations, so much was their desire to get to the final of the festival, no matter in what capacity, the main thing is to go on the stage of the Capella and demonstrate to everyone their successes in creativity. 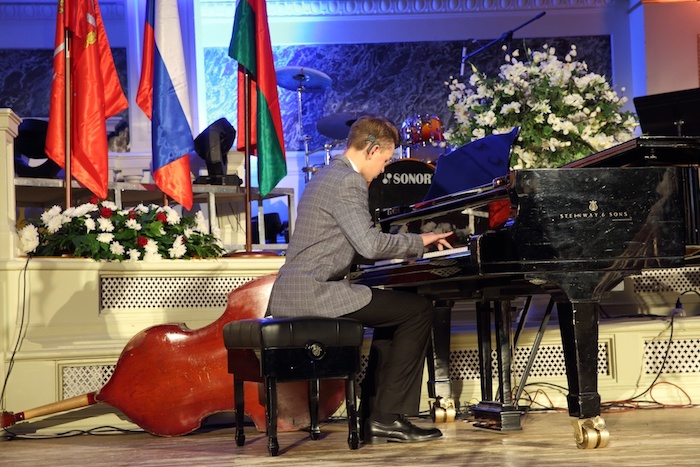 Because of the huge number of talented children this year, the final concert was divided into two sections. The finalists performed on the professional stage together with the stars, among them Tatyana Bulanova, Peter Zakharov, Chamber Orchestra Divertissement, the Philharmonic group, the Barynya ensemble, the jazz multi-instrumentalist and composer, the People's Artist of Russia David Goloschekin and many others.

Charming young singer from Kazakhstan, Chingiz Agibayev, conquered the hall, having performed a cappella with the vocal ensemble "Philharmonic". In addition to singing, Chingiz with great success is engaged in the studio of sports-ballroom dance and likes to play chess. 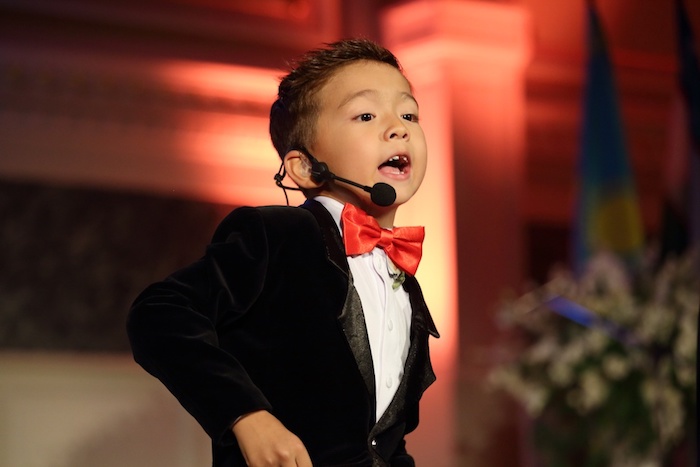 Ilona really wanted to make her debut on the professional stage, but when we found out that she would come on stage with David Goloshchekin, the whole family was beside themselves with happiness, - the mother of the girl Tatyana Pashkevich admitted. - To get to the finals is a rare chance, but my daughter decided to try and repeat this experience in the future.

A special guest who came to the second international musical festival "Magic Symphony" from Japan was a jazz musician with cochlear implants - Nobuyuki Yoshimoto. A gifted Japanese, while still studying at the university, became interested in jazz music. Since then, he started playing bass guitar and classical guitar and performing in front of the public. However, Nobuyuki Yoshimoto became completely deaf, having lost hearing on the right ear in 2010 and in 2012 - on the left. 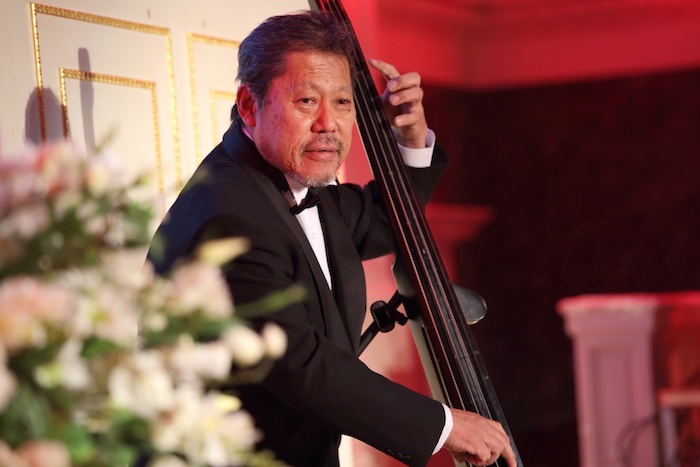 Nobuyuki Yoshimoto (Japan)
A special guest of the festival is a Japanese jazz musician with cochlear implants.

And nevertheless the cheerful guitarist did not part with the music. He underwent two operations on cochlear implantation. The results exceeded his expectations and expanded the possibilities of stage work. Now Nobuyuki Yoshimoto is not without difficulty, but recognizes notes, melody, intervals - hears low frequencies. He plays the electronic double bass and constantly acts as a bass player, guitarist or pianist at various musical events and jam sessions. In May 2017, his 5th CD, "JAZZ WORLD WITH THE COCHLEAR IMPLANT" (Jazz World with a Cochlear Implant), was released, consisting of eight original compositions of his own composition. 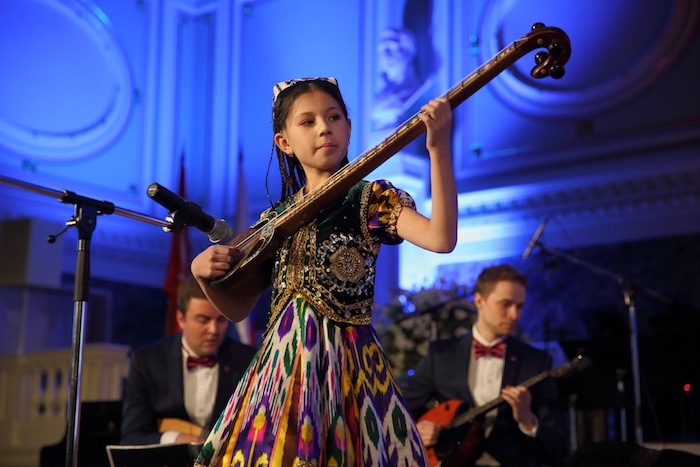 The final concert was attended by honorary guests: leading Russian otolaryngologists and otosurgeons, specialists in auditory rehabilitation, outstanding teachers, representatives of legislative and executive authorities. Greetings to the participants were sent by: Deputy Minister of Health of the Russian Federation Tatiana Yakovleva, Governor of St. Petersburg Georgy Poltavchenko, Human Rights Commissioner in Russia Tatyana Moskalkova, Human Rights Commissioner in St. Petersburg Alexander Shishlov and many others. 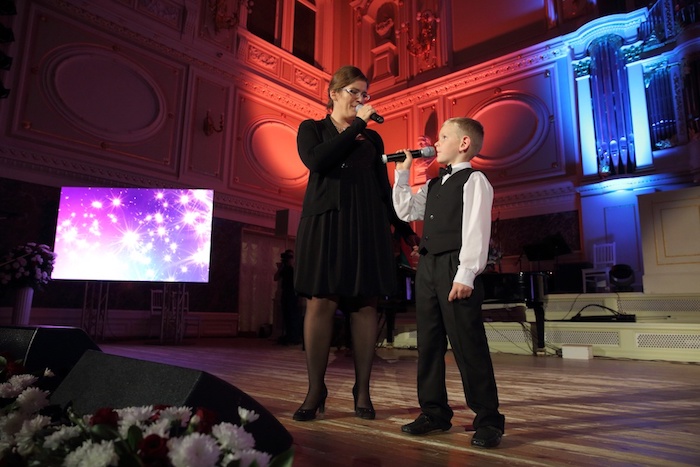 Joint presentation of Gleb Ovcharov and his mother (Belarus)

"I think it was not accidental that the venue for such an event was St. Petersburg, a city wh ere great attention was always paid to people with disabilities," said the chairman of the St. Petersburg Social Policy Committee at the opening of the second international festival "The Magic Symphony" Petersburg, Alexander Rzhanenkov. "A huge role is that such concerts have become a reality, and not a dream physicians play, and in particular the St. Petersburg Institute of Ear, Nose and Throat, wh ere most operations are being done today on cochlear implantation in Russia. 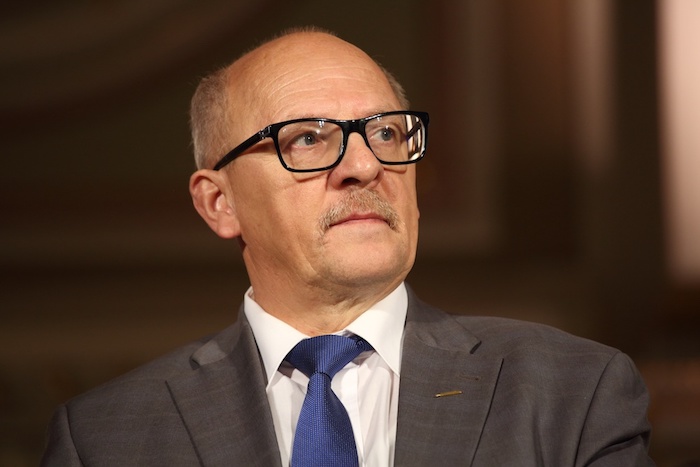 "Our institute and our city as a whole are one of the first to start cochlear implantation," added Yury Yanov, director of the St. Petersburg Scientific Research Institute of the ENT of the Russian Ministry of Health, academician of the Russian Academy of Sciences, president of the National Medical Association of Otorhinolaryngologists, and now he is one of the world centers of CI. 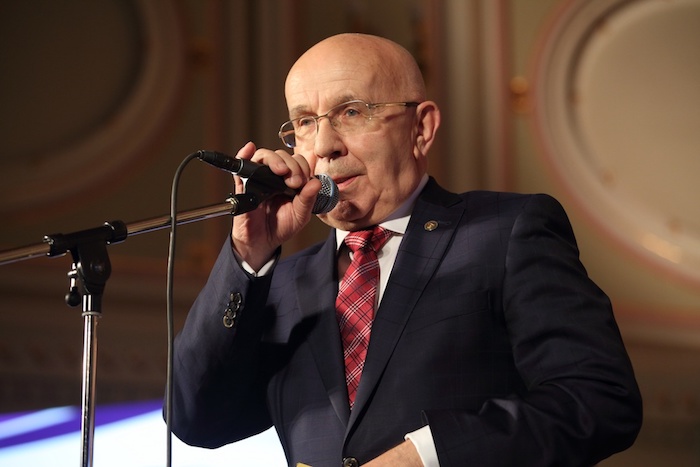 Yuri Yanov, honorary guest of the festival, academician of the Russian Academy of Sciences, director of the ENT Research Institute, MD.
Yuri Yanov: "St. Petersburg Research Institute of ENT" of the Ministry of Health of Russia is one of the world centers of cochlear implantation. "

"I am very happy to see many parents, teachers, doctors, professionals, whose work was the result of today's second unusual concert," said Elena Kiseleva, deputy, chairman of the Commission for Social Policy and Health of the Legislative Assembly of St. Petersburg. - The way of all participants of this festival to music is long and difficult, and it causes a deep sincere admiration that you are going this way, overcoming all obstacles. 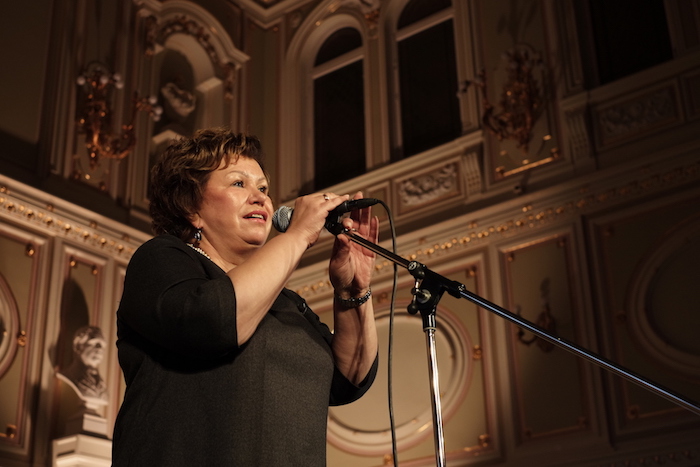 Elena Kiseleva, deputy, chairman of the Commission for Social Policy and Health of the Legislative Assembly of St. Petersburg
Elena Kiseleva: "The way of festival participants to music is long and difficult. It causes deep sincere admiration. "

"To hear is a miracle," Mikhail Dubin, head of the city health committee, summed up. - Although usually those who hear do not think about such things, but those who are accustomed to living in silence, understand how expensive and valuable this skill is. 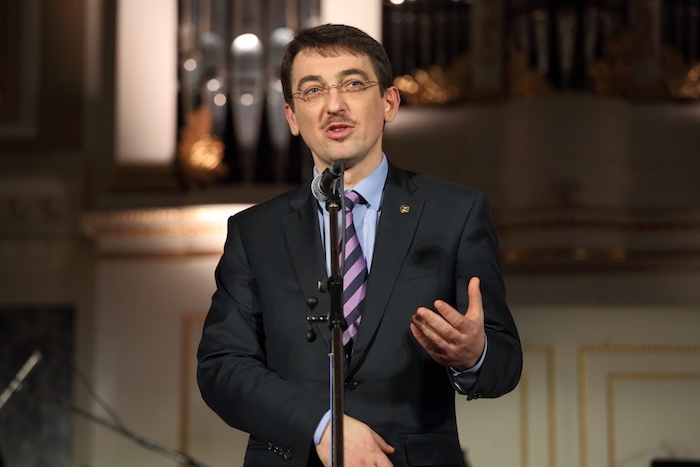 Mikhail Dubina, head of the city health committee
Mikhail Dubina: "To hear is a miracle. Those who are used to living in silence, understand how expensive and valuable this skill is.

The organizers of the second international festival "Magic Symphony" were:

Sponsors and partners were: 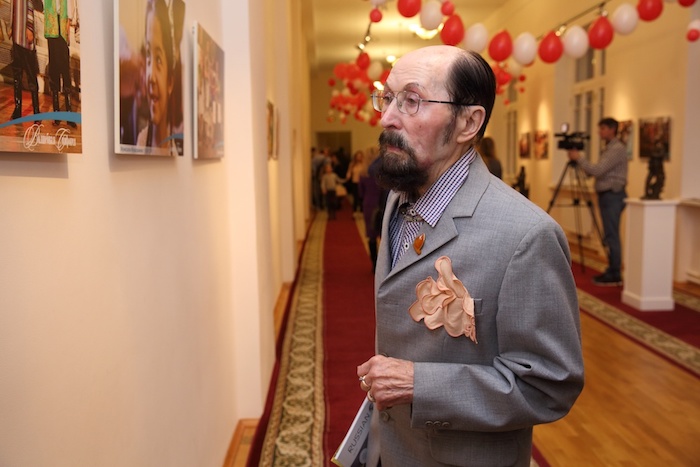 And on the eve of the cultural event, on October 5, the city's Legislative Assembly hosted a round table on the topic "Aids for children in St. Petersburg". Deputies of the St. Petersburg Parliament, representatives of city committees on health, social policy, education, heads of the Territorial Fund of the Compulsory Medical Insurance Fund, the St. Petersburg Scientific Research Institute of the ENT of the Ministry of Health of Russia and other medical- rehabilitation institutions.

In 2017, the music festival "Magic Symphony" was recognized at the federal level - won the contest "The best social projects in Russia - 2016". The organizers of the event hope to make an international music festival for children with hearing impairment a good tradition and to expand its format and scale every year. 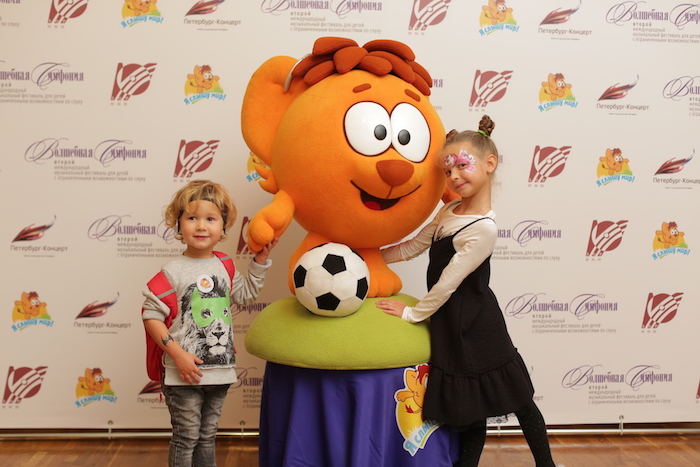 For a detailed photo report, see our VKontakte group.
Site of the festival: ci-festival.com.


Feedback from participants and guests of the festival

This is a huge gift for children - an opportunity to visit this magnificent city with a delightful architecture and many museums. To live in the heart of this city ... Thanks !!! Thanks to everyone who participated in the organization of this event. We liked everything very much.

I was especially pleased to have the opportunity to personally meet Inna Koroleva, thank her.

Several days have passed, and we are still impressed by the gala concert of the festival "Magic Symphony - 2017".

I would like to sincerely thank the organizers of the festival for the opportunity to perform on the same stage with wonderful professional musicians. More recently, we could not even dream about it, and now, thanks to you, it has become a reality! Thank you for new acquaintances, unforgettable impressions, a sense of magic that does not leave us until now, and for your unlimited patience! You have instilled confidence in us and inspired us and, I hope, not only us, but also other children about their parents, for new achievements! Thank you!

Thank you very much for the opportunity to participate in the concert and for wonderful gifts!

I look at the singing and dancing children who once lost the opportunity to hear, but thanks to advances in medicine and technology, they returned to the World of sounds ... How could their destinies arise .. who knows .. And now they are performing on the stage of the Capella ) For me this is a Miracle, of which I have already forgotten a little ...


Media about the festival

+
Thanks for subscribing!
You have been sent an email to confirm your subscription!